The expression of feeling and story is an important part of music in movies and life.  Watch a breathtaking scene in a movie and odds are there’s a glorious soundtrack playing in the background.  In a ritzy restaurant, the owners play smooth jazz, creating an atmosphere of delight and charm.  How do composers achieve these emotions?  It all stems from the type of chords being used.

A triad is a three-note chord.  The C Major chord spoken of in an earlier lesson is one such triad.  There are four types of triads in all: Major, minor, diminished, and Augmented.  Each triad or chord has its own emotion: Major= happy, minor= sad, diminished= depressing, Augmented= dreamy or heavenly.  We will be discussing the three easiest chords to play: Major, minor, and diminished triads (or chords).

I don’t mean to be such a downer.  But this is the triad of no hope.  Not only have you lost your job, but you ran over your dog on the way home.  This one is even sadder than the minor one.

Any sort of image or story may come to mind when playing these various chords.  Try and make up some of your own, if you can.

There are styles of music that do not evoke images or stories.  This is because some musicians do not see images or stories in music.  Fredric Chopin was a famous composer in the Romantic Era.  He was called the poet of the piano because his pieces did not evoke any images or stories to them (very different from Mozart who had drama behind everything that he wrote).  Chopin did, however, use the same triads we are talking about here.  Which means Chopin’s music created a depth of emotion.  It was pure music for music’s sake… which can be very powerful in its own way.  Instrumental smooth jazz at a ritzy restaurant comes to mind… as long as you don’t know or hear the lyrics to the songs they are parroting.

Play all the triads in the C Major scale.

Once you got the idea, play the chords in order twice with your R.H.  The first time play it fast.  The second time play it slow, listening to each emotion of the chord.

To make it easier, here are the same chords in order one after the other:

Play the chords in any order you like, and in a counting rhythm (I recommend one chord for every two counts).  Try and listen for what chords play and sound good with each other.

This is sort of like reinventing the wheel now.  Next lesson I will tell you the various chord structures composers have used for hundreds of years… and song-writers have used in every popular song for the past hundred.  This is found in the hierarchy of chords.

Other lessons to peruse at your leisure 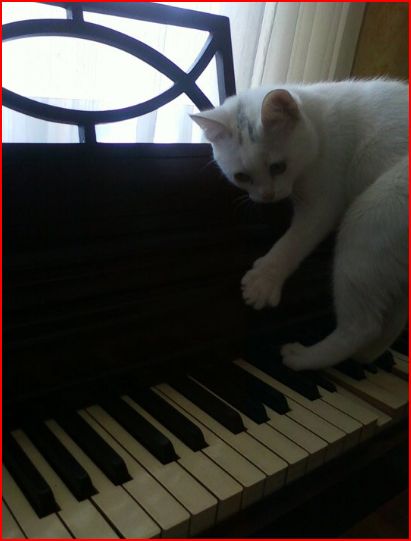 7 thoughts on “5 Minute Piano Lessons: The Emotion of Chords”