Story is a very important element for most modern games.  Do you need one to make it great?

In The Art of Touch I pointed out that Gameplay is King.  A game should allow us to touch or affect–via controls–most of what we see.  If you were to simplify the other elements–visuals, music, sound design, and story–would it still be fun? 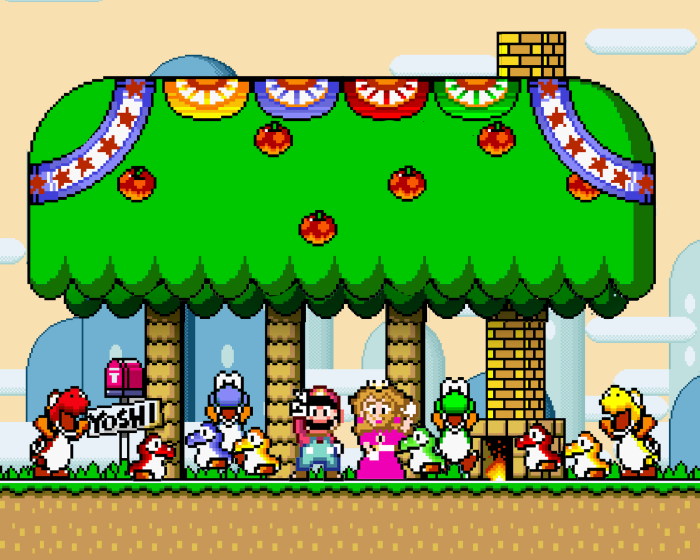 All you really know is that some dragon took the princess.  The journey is what makes the game so much fun, because, the quest is interactive.  The simple story is an excuse to jump on turtles and ride dinosaurs.  It frames the game and supports the gameplay.

Adapting it to a book would be another… story.

Super Mario World wouldn’t make for compelling fiction.  If I were commissioned by Nintendo to write such a book, there would need to be some changes.

The world would need some explaining.  Where did the islands come from?  How does a feather create a cape that allows our hero to fly?

Perhaps there was an owl who vowed to help Mario and Luigi by placing his magical feathers in certain hidden places.  This owl could even act as the sage personality in a hero’s journey, giving Mario and Luige the power to save the day.  Without the owl, audiences (who haven’t played the game) would not understand the feather.

The Koopa bosses are varied and unusual.  How they attack shows distinctive personalities which are based on musicians.  In a book, these personalities would need to be explored.  Each island Mario encounters should be a reflection of that Koopa boss’ character.  Wendy O. Koopa’s island could, perhaps, be full of discarded toys.  This would reflect the unrelenting force of a spoiled child.  It makes for one very bratty boss fight.

The journey of the brothers should be written out like Homer’s Odyssey or Mark Twain’s Huckleberry Fin.  Mario and Luigi go on an epic quest to save the princess while encountering all sorts of monsters along the way.  The monsters should reflect the inner demons of the protagonists.  Each monster they face helps them overcome these issues.  There should be a point where the brothers break off, perhaps separated by some sort of conflict, only to return and unite for the final battle with Bowser.

The words would have to be compelling enough to draw the reader into this strange and dreamy world.  It would have to be a little more engaging than, Mario jumped onto the brick platform.  There was another platform further on.  It was a giant mushroom.  Mario ran and jumped onto the giant mushroom.  There was another platform further on…. I think you get the idea.

Examples of Story in Gameplay

TellTale Games are known for their great stories.  Gameplay and story are so well-balanced, because the choices you make have a strong effect on the future.  That effect is the gameplay.

This puts the player in the writer’s chair.  It tells him or her to make choices on the plot.  It also punishes the player for making wrong choices, even though the reasoning behind that choice seemed sound at the time.  So, the gameplay, or the touch, is found mostly in the choices you make.  Without that addition, their games would be simple linear stories littered with quick time events.  QTE are not the main draw of a TellTale game, affecting the richly-told story is.

Bethesda is known for their story-driven games.  They are far from linear and their strength is found in the struggle to survive in a world gone mad.  Without stories, the gameplay is still powerful.  The feel of a bow in Skyrim is just right.  The magic and the sword play give you tactical options with every enemy you fight.  If the world were devoid of stories, gameplay alone would still make it fun.

Stories push it to beyond fun and into the fantastic.  They create a philosophy for why you shoot that bow.  Every direct hit of the arrow feels more satisfying.  I’m not hitting a bunch of coded 1s and 0s.  I’m saving a farmer from the scourge of giant spiders.  Taking down a dragon makes me more powerful which helps me affect the world even more.  It also gets me one step closer to answering questions about my past.

Well-developed stories turn regular games into page-turners, or um… button-pushers.  But these stories must be smartly integrated into the gameplay in order to work.

In Skyrim, my most memorable side-quest happened in the city of Solitude.  You can find the harbor city on the North-West corner of the map.  The town is designed against a mountain.  There is a maze of roads and buildings bustling with activity.  This was the perfect setting for the quest.  As I was just perusing about the nooks, searching for secrets and mischief, a Argonian lizard man named Jaree-Ra encouraged me to speak to him.  It was on the sly and not in-my-face “Hey, listen!”  He seemed a decent fellow, though a bit shifty.

He comes off as an honest sort of thief.  There’s a ship coming into harbor called the Icerunner.  All he wants me to do is turn off Solitude’s lighthouse.  They will do the rest.  Oh, and they don’t wish any harm to be done to the crew.  After they procure the goods, they will simply let them go.

My character was a naive wood elf.  It seemed rather simple for the elf.  No harm would come to anyone, and he’d get a little coin in his pocket. 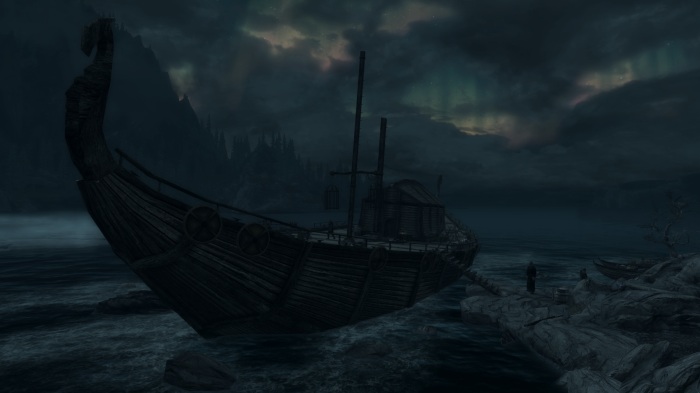 My wood elf does as instruct and then goes to the Icerunner wreckage to collect his prize.  The merry thieves greet my elf in thanks to his service.  They point him to the leader who is found somewhere in the ship.  But something is amiss.  The elf notices dead bodies all about.  He has been lied to.  A paladin side to him comes out now.  It is time to make things right.

Instead of talking to the leader, I choose to have my wood elf kill him.  The thieves are also killed.  A note found on the leader has orders to have my character killed.  And this was such a delicious moment for me as a gamer.  I beat the bad guys to the punch!   It also complicated my character because he was complicit in a crime that murdered sailors.

Turns out, these “honest thieves” are the Blackblood Marauders.  My wood elf finds the location to their hideout at the Broken Oar Grotto.  He immediately goes on a bloodlust massacre, killing every pirate in sight.  And when he runs into his contact, the backstabbing Jaree-Ra who wanted him dead… he finds this prattling liar angry!  Jaree-Ra isn’t contrite or sorry… not even playfully antagonistic.  He’s angry!  I killed his boss.  I killed his men.  Rather than a confession he attacks out of vengeance.

I decided that this wood elf, who had great sneaking abilities, and was quick with the bow… would not be a fan of thieves.  When he found there was a thieves’ guild… he attempted to kill them all as well.

In Fallout 3 I had a companion.  She followed me on many adventures and we became close.  On one such adventure we were freeing slaves.  She ran ahead of me into a trap, and she was killed.  I could have reloaded a previous save, but I realized the value of a good story.  My character finished the quest fueled not only with a chance at freeing slaves, but also with revenge for the death of a good companion.

We are on the verge of a new chapter in gaming history, stepping ever closer to the holodeck.  Virtual reality games take us deeper into the gameplay.  Anhance it all with a good story and you’re set for something completely different.

Right now we seem to have hyper-versions of old FPS style games.  There’s even a version of Fallout 4 coming out.

These are fine for now, but can you imagine the new experiences yet to be discovered? Can you think of what new game types will be developed that only work with VR?

VR brings you much closer to actually touching a world, especially with peripherals like the PlayStation Touch controls.

Games at present tend to be filled with some element of fighting or carnage or war.  This is necessary because the controls are so simple.  Huge explosions and interactive moments take the player away from the knowledge that he or she is simply pressing buttons and moving knobs with fingers.  But like Plato’s allegory of the cave, these are merely shadows on the wall.

VR has the chance to create more nuanced gameplay styles.  Imagine games that focus more on relationships or simple changes to the environment.  A player would need to notice the way the npc’s eyes are twitching.  What is the npc’s body language telling the player about her words?  Agatha Christie mysteries and Sherlock Holmes would come alive on such a platform!

Imagine a VR walk through the woods.  Your father warns you not to stray from the path.  But there are hints of a deeper mystery beneath the leaves, hints that wouldn’t be as noticeable in a regular game.

Behind the leaves could be an ancient civilization.  Perhaps your taken captive.  How do you escape?  Instead of clunky QTE… the player would actually try and solve his or her way out.

I don’t think you would need bloody deaths or gruesome killings to keep the player engaged.  They are already close enough to the game, and we don’t have any idea what the long term effects of VR could be.  I don’t believe they should be handled like regular games.  Your sense are heightened enough.

Could a visceral war game on VR just might lead to PTSD?

Give them a fish out of water story.  Provide nuanced tools of escape.  Focus on relationships.  This would be compelling enough.  I envision new games like dramas and even romantic comedies with you in the protagonist chair… or perhaps floating around like an omnipresent narrator, directing the actions of NPC characters.

VR just might be an answer to that haunting statement made by Roger Ebert so many moons ago.

“No one in or out of the field has ever been able to cite a game worthy of comparison with the great poets, filmmakers, novelists and poets.”

Edit:  I should have known they already had a cartoon story of the game.  Here’s a fan remake of one of the episodes!  I had nothing to do with this very cool project!