A bird’s eye view from one of the many rooms in the large floating ANOMALY found in my adventure map Anomalous Ruins.

Download the adventure map here.  PC only for now.

Boot up Minecraft and it should appear along with your other single-player worlds.

I will eventually find a way to integrate the music into the map.  Until then, consider playing my youtube playlist in the background.  Follow the signs in the map when to pause and unpause.

Three and a half years ago, I struggled to find an outlet for my creativity.  I had written a science fiction novella called Symphony of Sol, a fan fiction of Metroid, and some urban fantasy on the side.  I composed music here and there with a bachelors degree in that field.  In all of this, I’ve always had a great love for video games.

How could I combine all three: a video game with an original soundtrack and a story?  I had no coding experience so I turned to a most peculiar game.

Anomalous Ruins is a free adventure map that I have built.  I am using it for three purposes: because it was fun to build, to show off my original music, and as a resume to get into the video game industry.  Enjoy! 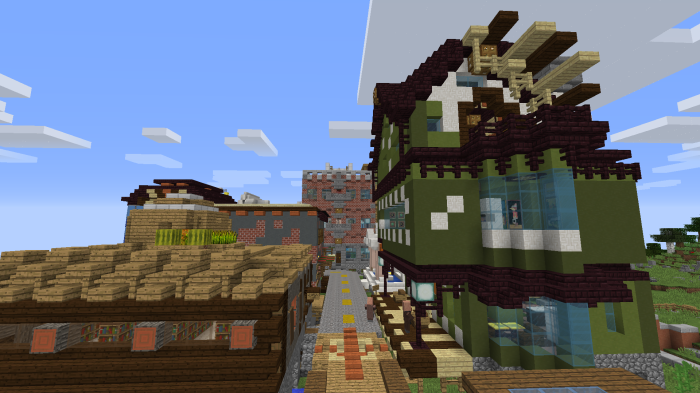 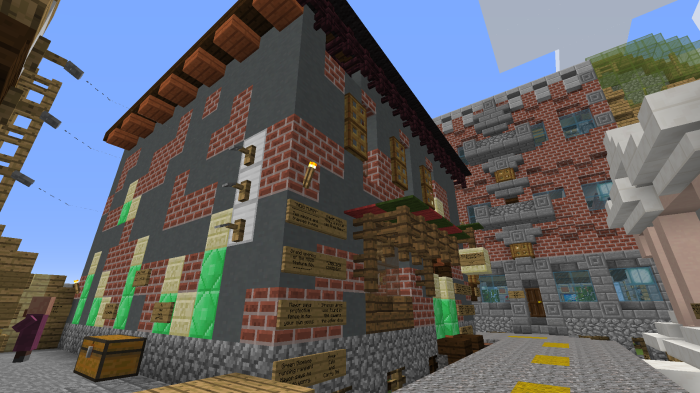 Minecraft came to me years ago through various channels on the net.  I saw it up close with my cousin playing it.  It seemed so simple, so obvious… a sandbox world of pixelated cubes.

It took me another year before I just gave into the hype and bought it.  This was about two years before starting on the Anomalous Ruins adventure map. 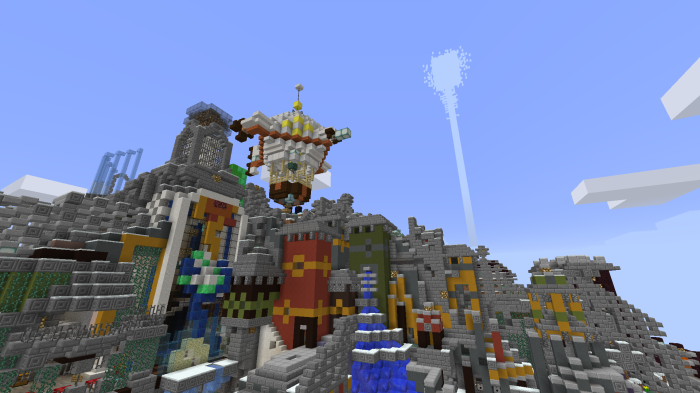 The “backyard” section of my adventure map Anomalous Ruins

The Minecraft I knew then was still in beta.  There were no horses, ocelots, villagers, whither monsters, endermen, or ender dragons.  There was one shade of wood and only cobblestone stairs.  I still remember the first time I booted it up in my apartment. 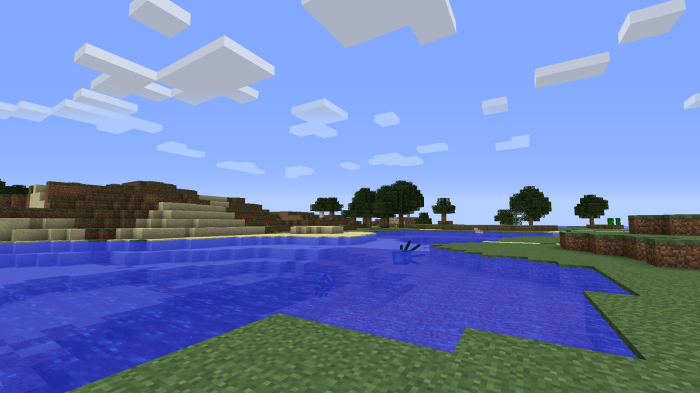 I sat there stunned, gawking in wonder through the window of my computer screen as the first brave new world popped into existence.  It was a very big pop, a big bang if you will.  The images and cubes warped to life like green and blue, cube-shaped popcorn.  I was in my own place, my own universe, and I was ready to explore!

The first few nights were spent hiding from zombies in the leaves.  I didn’t know you could punch down trees, but I could at least punch my way into the leaves and hope the zombies didn’t follow.  It was very uneventful, and yet, I was so invested with discovering this new way of life for my character.  How could Steve survive?  Eventually I added dirt and sand to my punching skills and after a quick look on youtube… I learned about punching trees and the importance of coal.

There was no official story to be had so, being an aspiring author and always thinking in stories, I made a simple one up.

Steve washed ashore; his pirate ship destroyed in a storm.  Shipmates with sickly green skin appeared to him at night or in dark places.  They were odd versions of himself.  They chased him about in an attempt to spread the disease.  Steve was immune to their bite.  When killed he reappeared along the shoreline as if awaking from a bad dream.  No matter how many times Steve died, the world went on, as he spawned within it.  The only proof of his past existence were the tools and material left behind.

Something strange had to be keeping Steve from a lasting death, a magic that made the player both vulnerable and immortal.  It was as if Steve had been meant for some higher purpose, and it was left for the player to search it out.

In short, what was the meaning of Steve’s minecraftian life? 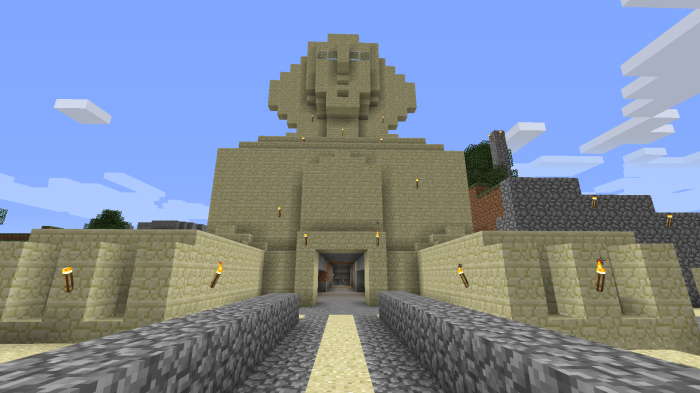 One of my very first creations. Notice the extravagant use of cobblestone.

My first major building project was a small sandstone pyramid built over my very first spawnpoint.  It seemed fitting since I kept appearing their after I died… might as well arise like a mummy from his sepulture.

My first spawnpoint across from the sphinx

Mojang eventually added more characters to the mix, each without a story.  This suited me fine!  I would make one up for myself. 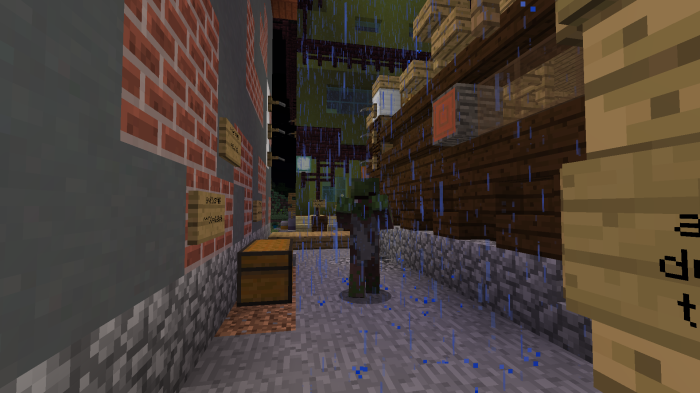 These questions eventually drove me to create the Anomalous Ruins adventure map.

I used to be a strict survival-only player.  I had an idea though that pushed me over to the creative side.

I wanted  to make a false cloud and place a castle on it.  This was best done with snow.  This meant many broken shovels of snowball after snowball.  You can only hold 16 in a single grid of your inventory (and yet 64 cobblestone blocks).  This minor annoyance caused me to design a much smaller false cloud made of snow blocks.  It looked just wonderful, but hardly the large castle in the sky that I had imagined!

So, I entered creative mode for the first time.

I could fly!  And I was eternally rich with blocks!  I vowed to put all of this to good use. 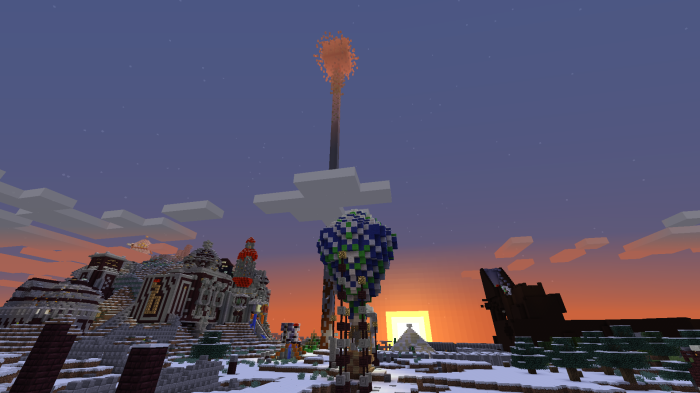 Watch my first trailer for Anomalous Ruins to see more

The first version of the adventure map was to be a puzzle game like Myst or Witness.  The story had no connection with the zombies and other colorful characters in the game.  But then I found out how hard it was to actually design puzzles.  This was before Johnathan Blow began his work on the Witness which has had an obvious influence to my adventure map.  I had not yet come up with the puzzle box idea.  At a loss for what to do I decided to explore all the gameplay options Mojang gave for an adventure map.  This led to combat with zombies.  Adding the regular gameplay elements to the game meant, as a writer, I had to explain them.

Anomalous Ruins is a story of loss and mourning about a cataclysmic event called Ragnarok.

Mild-mannered Clo once lived with her husband Lio in the quaint little village of Origin City.  Long ago the founders of the city had fled some great calamity.  This calamity was far and away across the Barrier Sea and found deep within the Forbidden Continent.

Clo worked in the green house garden with her mom.  Her husband always worked late at the nearby mine-shaft. 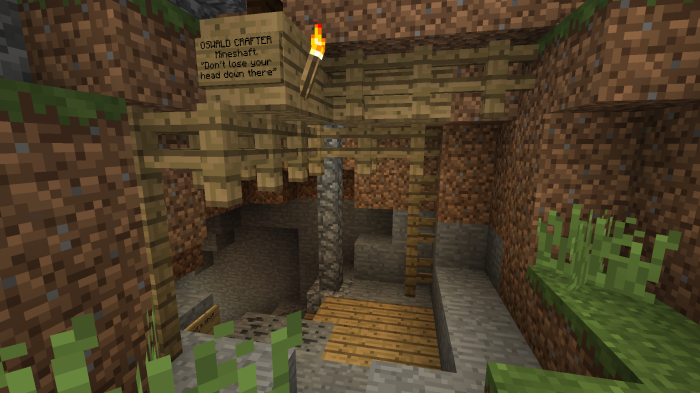 One day, while Clo was cooking up some mushroom stew for a late supper, Lio staggered in deathly ill.  Three days later, he died in Clo’s arms whispering the strange words, “D L is here; D L is right here.”  In her grief she vowed to never lose a loved one again.

She remembered all the great legends of her people.  The Tree of Life spoke of a great white tree with the ability to grant immortality to any who ate of its fruit.  The fruit also brought what was once dead back to life.  She had thought the stories false once upon a time, but now with her husband’s death, she was distraught with a powerful and gloomy grief searching for any chance at his return.

This tree existed in the Forbidden Continent.  An airship crew planed to take their second voyage there.  They needed a camera person to help document the trip.  She applied. 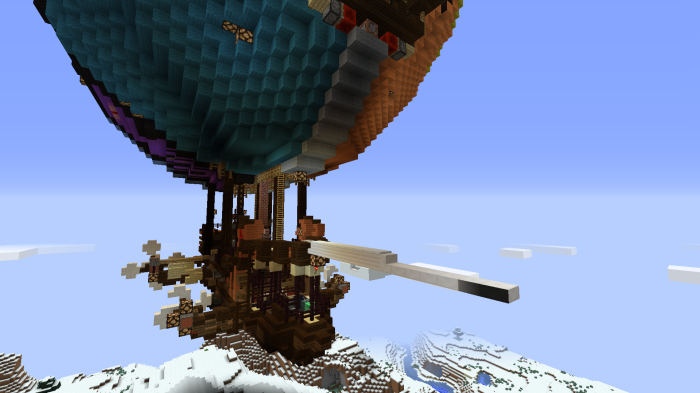 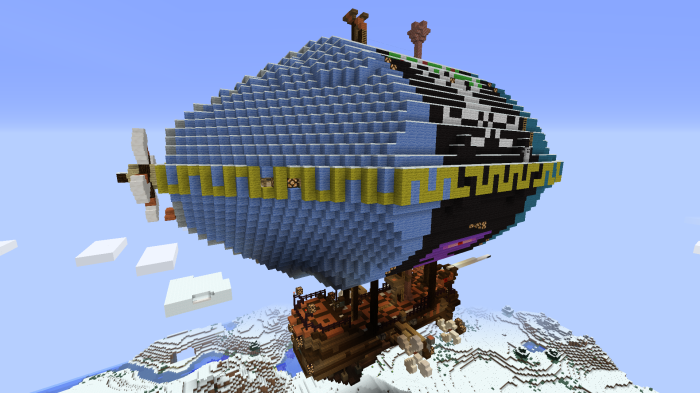 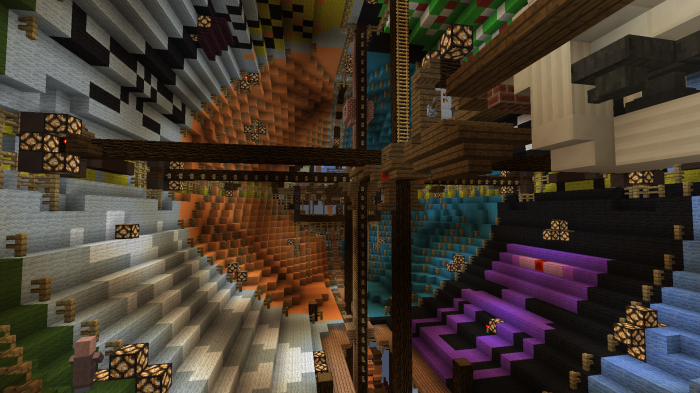 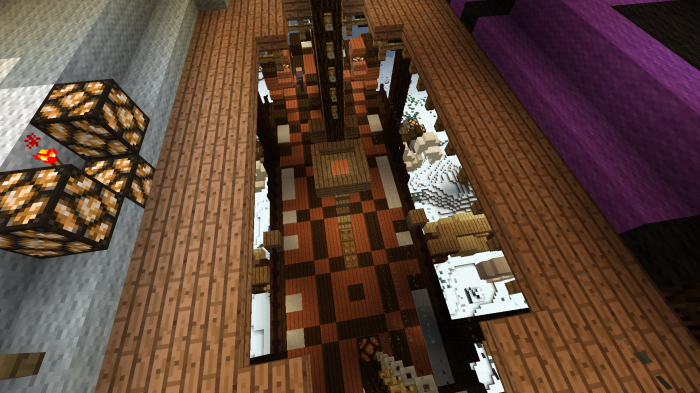 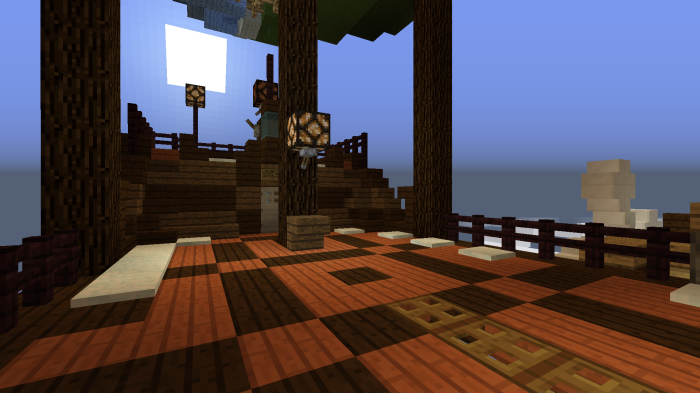 The Cluttered Narwhal airship. Clo and the crew take this towards the Anomalous Ruins.

The game takes place after she has explored the ancient ruins in search of the tree.  You begin by leading Clo through a nightmare.  She remembers the loss of her husband, and his sudden return to her as a zombie.  She keeps on saying how she shouldn’t have tried to bring him back.  In the dream there is a button with a sun and moon bound together.  A creeper face is etched in sandstone above the button.  She remembers this vividly from the temples she had explored.  Once pressed, the whole world had been changed forever.

When she awakens, it is the day that the documentary of her journey is to be premiered.  She wonders around the city exploring all its various hunts and haunts, until she faces the Moon Movie Theater.  Her premier awaits inside.  And this, my fellow minecraftian friends, is where Anomalous Ruins truly begins.

Original soundtrack for that map here.