I took a quick break from editing through Void Voyage 1 to enjoy Valve’s next gem of a game.  For those whose only encounter with games extend to the length a bird can be slung at a house of pigs, the first Portal was a gem in its own right. It’s a unique, non-violent game, standing out amidst a slew of five top-notch titles (four of them requiring death and destruction) that were released in 2007.

The Orange Box was the greatest deal in nerd gaming history!  Three of the games centered around physicist Gordon Freeman’s saving-the-world exploits in the Half-life universe.  Half-life 2, and its following episode 1 and 2, were a critical success from the get-go.  For those three alone, I would have purchased the collection of five games.  The fourth game was Team Fortress 2, an enjoyable multiplayer-based shooter, mixing humor, sportsmanship, teamwork, and explosions. 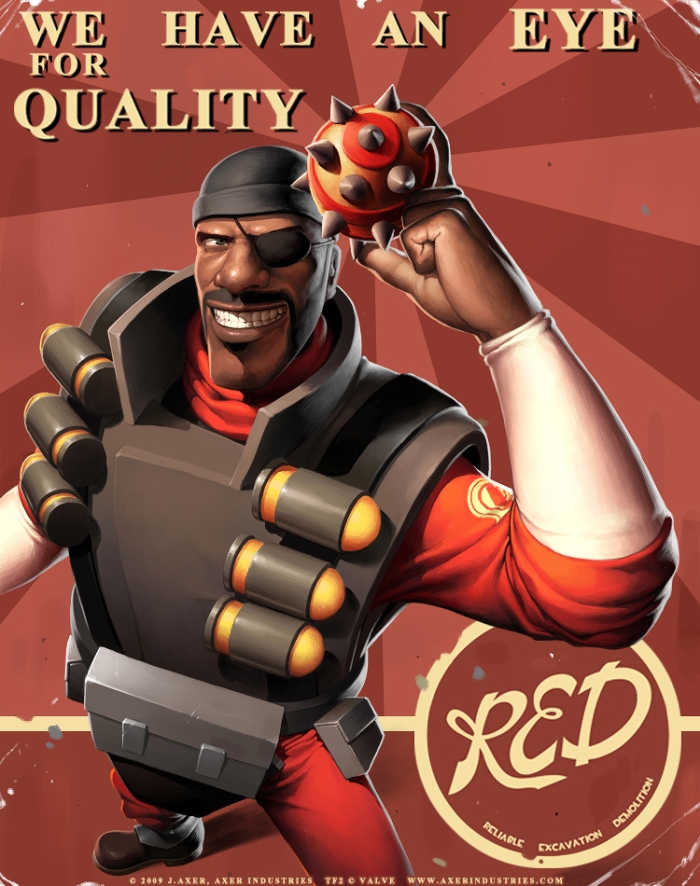 The Demoman was my favorite

I played these games more then I know before trying out the final entry.  Portal was an oddity.  Like the other titles, you are placed in the first person, and even given a gun, yet, there are no enemies to shoot at.  Instead, you walk through seemingly bland testing chambers in order to solve puzzles.  So, I moved from the high octane pumping action of Half-life 2, to laughing it up in the competitive antics of Team Fortress 2… from all of that, to um… using a gun to solve puzzles?  It’s a portal gun by the way, creating an instant doorway from one place to another.

Out of the five, this one happened to be the best all around game.  And it all had to do with the impersonal, sarcastic computer, named GLaDOS, egging you on from chamber to chamber.

Now Portal 2 is out… and it’s better than ever!  You play Chell, the same mute protagonist of the first game.  GLaDOS also makes her triumphant return.  You did something to her in the last game, and she’s out for revenge.  But first things first, her programming gives her this certain sort of itch to test you, yet again, with various, puzzle-solving gauntlets.

Armed with the same quirky portal gun device, you are placed in the similar black and white rooms of the enrichment center from the first game.  Everything has been upgraded though, meaning it’s all more visually approachable.  The addition of plants creeping inside the decaying walls is a nice touch, breaking the crumbling enrichment center’s clinical architecture.

Much has changed between games, you see.  In fact, according to the automated voice that wakes you up, it’s been 99,999 days.  Thankfully, the blubbering, intelligence core, Wheatley (voiced by Stephen Fry), has come to your rescue… or rather has waken you up to rescue him…  It’s complicated.

The writing is top-notch humor, accessible to anyone over the age of 10.  It’s all nonviolent stuff here, brainy puzzle-solving action, between zany wise-cracking comments, much like the first game.  Yet, the story is much more grand and epic than you would expect.  I won’t be the first or last to say this, but it’s very much like playing a Pixar movie.  Just as fun and funny to watch, and just as approachable.

And that’s only the first segment of the game (lasting eight hours for me).  The second has you playing in cooperation with a friend.

Two players control the robots above, each carrying their own portal gun.  This means the possibility of four portals at one time!  Storyline takes a back seat this go around.  With two people in the mix the puzzles can become rather devious, yet they are just as fun and satisfying to solve!  GLaDOS’ makes an appearance here as well, her disembodied voice making wry comments on which robot she likes best.

So, while you are waiting for me to finish an epic sci fi story of my own, go ahead and have some fun with this one!  I don’t always recommend games to everyone, but I highly recommend this one!  If you like puzzles and good stories, then Portal 2 is right for you.  Get it for your PC, Xbox 360, or PS3.

2 thoughts on “A Good Excuse to Procrastinate: Portal 2”